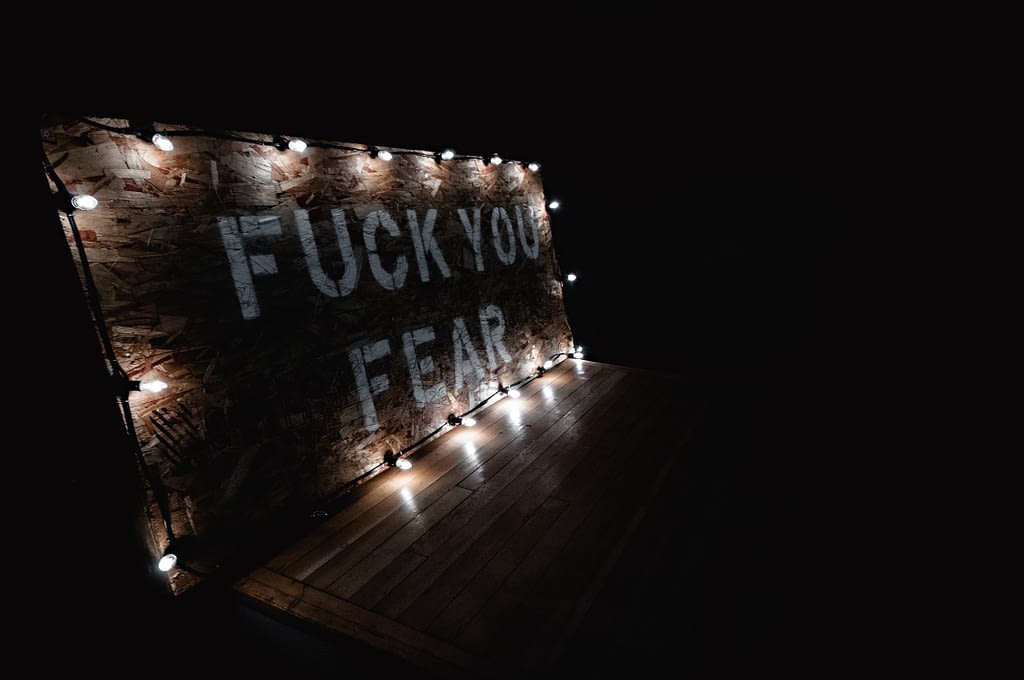 What are you afraid of?

While there are people who wake up each and every day with feelings of fear so strong they struggle to get out of bed, there are others who—be it at a local movie theater, haunted house or amusement park—voluntarily hand over their hard-earned cash to knowingly have the stuff coursing through their veins.

Whether a crippling obstacle or a light-hearted way to have fun, there’s no denying that fear is a force to be reckoned with.

No group of people knows this as well as those who willingly leave the comfort and stability of corporate America for one that’s loaded with uncertainty, vulnerability and potential embarrassment–entrepreneurs.

Having started my own business and helped countless others do the same, I’ve noticed that, more than anything else, there are two types of fears that plague entrepreneurs—a regular, run-of-the-mill fear of failure and a genuine fear of success.

The first isn’t so jaw-dropping, but the second might have left you scratching your head a bit. Seriously, upon reading that, did you think to yourself, “Ari, who in their right mind would be afraid of a booming, profitable business?”

It’s a fair question and one that I’ve asked myself in the past, as well.

Based on study and experience, I’ve learned that not only is the fear of success real, but it’s substantially more widespread than you might’ve ever thought possible.

But first, let’s take a look at what, as an entrepreneur, you’ve likely experienced firsthand:

The Conscious Side of Fear—Failure

You can relate–nobody enjoys failure.

From spelling bees and state championships to job promotions and big-time investments, missing the mark can be a disheartening endeavor. That said, for some people, the fear of failure is so intense that it both catches and eclipses their motivation to succeed.

So, instead of an earnest desire to succeed working within them, they’re more inclined to focus on sidestepping failure altogether. In the minds of the afflicted, if disappointment, frustration, and regret can be avoided, why wouldn’t they?

Oddly enough, hopeful entrepreneurs just like you who claim that fear keeps them from taking a shot at marketplace success usually have no issue managing difficult emotions—it’s accountability to family members and friends that freezes them, halting personal, professional growth in the process.

But that’s not even the most troubling part—the real danger of a fear of failure comes from its impact on the human psyche.

For example, guilt and regret can be harmful feelings, too. However, both are direct byproducts of an individual’s actions. When they’re present, a person feels bad about something he or she has done either poorly or inadequately.

Shame is different. As opposed to attacking the decision or action that first brought it about, it hones in on the self-esteem or identity of the person who feels it.

The best way to avoid this kind of damning sentiment? Do nothing at all.

Sadly, far too many up-and-coming entrepreneurs subscribe to this mentality.

The Unconscious Side of Fear—Success

Now, let’s compare a fear of failure with that of success.

Though the fear of failure is often conscious, more often than not, a fear of success isn’t.

In fact, it’s most commonly only made known through a person’s actions—not so much the words they speak or the thoughts they think. And here’s the thing—nobody is exempt from a fear of success.

Think about it—have you ever been on the verge of real success, only to find yourself making careless mistakes, struggling to concentrate and battling procrastination on a routine basis? If so, though by no means a certainty, there might be a genuine fear of success working within you.

But back to the craziness behind all of this—who wouldn’t want to be successful?

Well, truth be told, there’s an understandable reason behind all of this.

You see, as entrepreneurs, ours is a culture of success. No matter the industry-specific website, podcast or Internet video you watch, odds are extremely high that a shocking story of entrepreneurial wizardry will be told.

Because of this, success can be flat-out scary.

Making matters worse, because of the emphasis entrepreneurs and motivational strategists specifically place on overcoming a fear of failure, any fear that’s success-related is ignored and pushed aside.

The result? A long string of nonsensical actions that, if continued, might eliminate any sliver of future success entirely.

What You Can Do to Overcome Your Fears

Regardless of the type of fear you face as an entrepreneur, there’s a solution that can make things right. So, whether it be a fear of failure or a fear of success that’s preventing personal growth, try and implement a few of the following to get you back on track:

In and of itself, fear can inspire, motivate and bring about great change.

So, the question begs to be asked—how have you managed to overcome the dilapidating powers of fear to harness the emotion for entrepreneurial success?