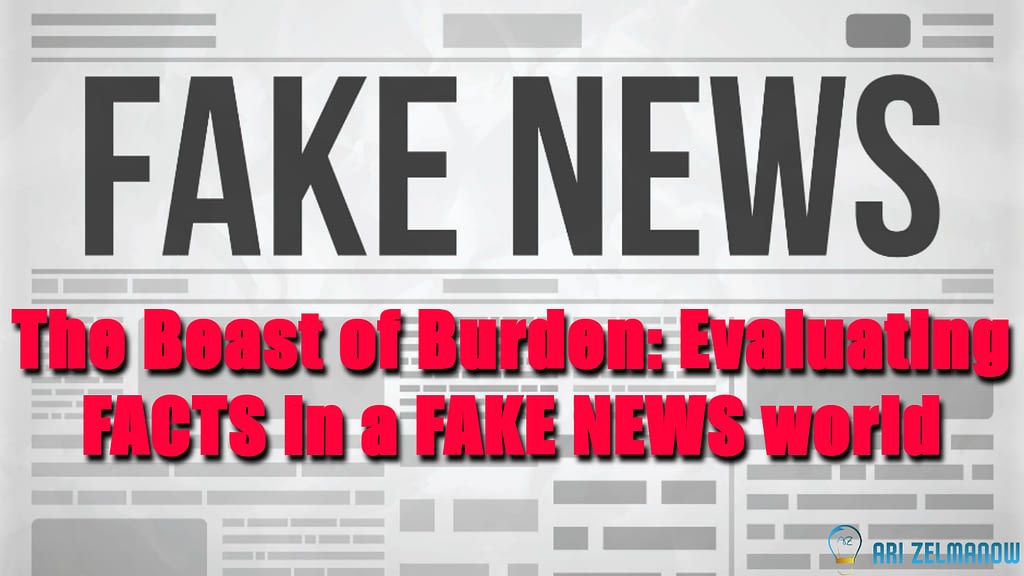 The Beast of Burden: Evaluating FACTS in a FAKE NEWS world

The BURDEN of truth lies with you.

In the world of FAKE NEWS, where lies from politicians flow like the salmon of Capistrano, and the ability to transmit information is as simple as twitching a finger, we thirst for a method to sort through the BULLSHIT and get to the truth.

There are facts that everyone can agree with, like the FACT that the earth is round (unless you are a famous rap artist and choose to ignore facts).

There are facts that people will NEVER agree with, like how to pronounce “gyro.”

Then, there is everything in between. This is where people develop contradictory fact patterns (explanations) for events under observation or question.

How can two people see the exact same set of facts and come to two different conclusions?

So I created a method for evaluating the strength of a fact pattern, and thus your position, using components from criminal law, criminal justice, civil law, and others.

The Fact Pattern Strength Indicator provides a way to pause and evaluate the strength of your position. The constructs are:

Gut feeling – A gut feeling exists sans evidence. The first thing that comes to mind is this scene from Office Space:

Peter: Sometimes I get the feeling that she’s cheating on me.

Lawrence: Yeah, I get that feeling too man.

Peter: What do you mean by that?

Lawrence: I don’t know man. I just get that feeling lookin’ at her. Like… She’s the type of chick that would just…

This is characterized by no evidence. Just a feeling. If we stop and think, we will see that in many cases, we are operating in this space. This is the weakest form of evidence.

Suspicion – A suspicion exists when there is some evidence, but it is limited. To build on the example above, it could be the gut feeling AND she gets text messages at all hours of the night, she has been more secretive and started taking a “night class” on Friday nights. The evidence doesn’t directly PROVE that she is cheating, but leads us to suspect, given the totality of the circumstances, that she is.

The fundamental thing to remember is that suspicion is beneath the “tipping point.”

Preponderance of the Evidence – This is the tipping point. It is where we go from 50% to 50% PLUS 1. We now think it is more likely than not based on the strength of the evidence.

Beyond a Reasonable Doubt – The evidence has mounted and we have no reasonable doubt. Sure, there are outlier possibilities; however, they just aren’t reasonably plausible.

Scientific Law – This is the platinum standard. There is literally no doubt. Outside of the hard sciences, this is pretty rare.

Let’s see how this looks in a few real-world examples, pulled straight from the headlines.

FACT #1: Donald Trump said that grabbed women by the pussy.

There is STRONG direct evidence (captured on video and audio) that supports that he made this statement. Trump even apologized for the statements.

This clearly falls into the Scientific Law strength category. He was seen and heard on video. He admitted that he made the statements thus eliminating any doubt that he made lewd comments about women. He did it – 100%. Case closed.

There is direct evidence to support this; however, Trump denies making the statement. The facts are as follows:

We KNOW that Trump has made shitty remarks in the past (see Fact #1 above).
We KNOW that Trump has taken a pretty controversial position against immigration.
We KNOW that there are opposing accounts from witnesses relative to the alleged statement.
We KNOW that Trump has denied calling certain countries “shitholes,” but admits to using “tough language.”
While testifying under oath, DHS Secretary Kristjen Nielsen confirmed that President Trump used “tough language” in an Oval Office meeting last week over immigration policy, but she said she did not hear him describe some African countries and Haiti as “shithole countries,” as has been reported. Her actual statement was, “I did not hear that word used.” The behavioral scientist in me recognizes that breaking the contraction, “didn’t” to “did not” is a sign of a dishonest statement. For example, do you remember this one:

So where does this leave us?

If you are a Trump supporter, you probably would place more weight on the evidence that he didn’t make that statement OR that the statement was taken out of context.

If you don’t like Trump, you are likely to place more weight on the evidence in favor of him making the statement.

For me, with the evidence available, this falls squarely in the preponderance of the evidence space (more likely than not). Maybe for others, it would fall in the suspicion space or the beyond a reasonable doubt space.

Regardless, we can’t be CERTAIN, right? This encompasses the vast majority of the situations out there. The evidence could be explained from different perspectives.

This is precisely why awareness of the strength of your position is so important.

There are multiple things at play. First, people tend to seek out evidence that supports their point of view and reject evidence that contradicts their view. This is called Confirmation Bias.

What do we do with this?

There are three things we should do to objectively evaluate facts:

Evaluate available evidence as objectively as possible, i.e. consider the source, the strength (i.e. is it direct evidence or circumstantial evidence), and how it all fits together.
We should be prepared to change our position based on new information – this is really hard to do. It takes awareness and practice.
We should examine issues and problems from an opposing vantage point, i.e. take the position opposite yours. When I was a police detective, I always looked at the evidence and case from the perspective of a defense attorney. What were its strengths? What were its weaknesses? What were alternate explanations? This either strengthened my position or afforded me the opportunity to modify my position.

The BURDEN of TRUTH lies within you – the BEAST is getting there.