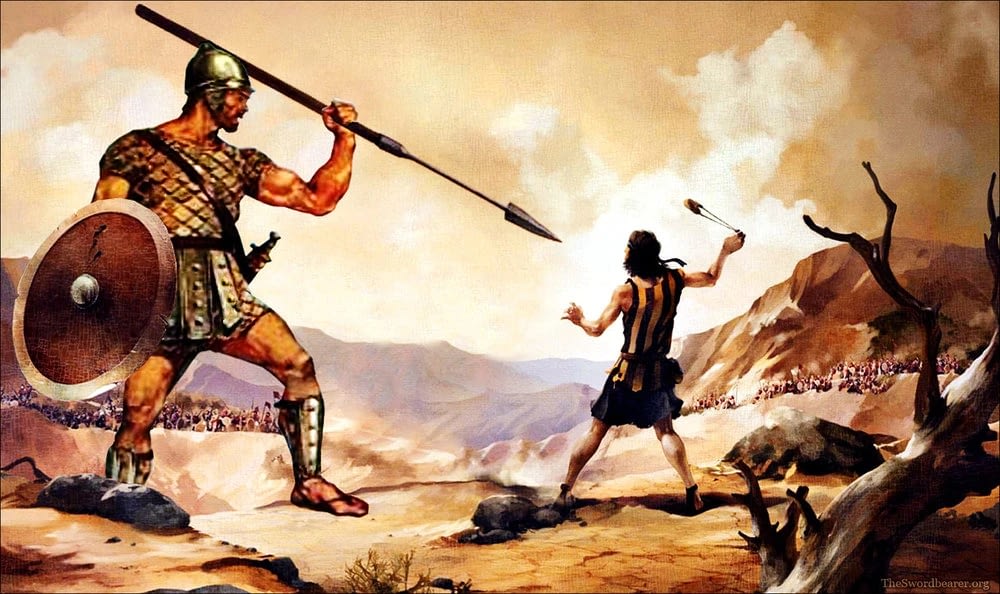 David Vs. Goliath: How To Compete With Bigger Businesses

Almost everybody loves an underdog.

Going back to the Biblical story of David and Goliath (and probably even further) it’s in our nature to root for “the little guy.”

When Buster Douglas knocked out Mike Tyson (who can actually teach us plenty about powerful marketing) he was a 42-1 underdog. The upset became an instant international phenomenon and monumental sports memory.

Any time an underdog achieves victory, it’s compelling because it’s NEW. We like new things. When someone or something is on top forever, it gets boring. Eventually, the giant has to be toppled to some degree. There would be no innovation if it wasn’t for the underdog fighting spirit.

Now, don’t get me wrong. I’m sure a lot of us running small to midsize businesses would like to one day experience what it’s like to be the “Goliath” of our respective industries. But to get there, you got to accumulate your own string of “upsets” to get there.

This article is going to provide some perspective into how you can thrive in the role of the “little guy” or the new kid on the block.

You may be surprised to learn that there are advantages at your disposal that the big dogs don’t have.

Cloak Your Competition With The “Villain Effect.”

At Profile For Profit, we put a lot of emphasis on positioning your product or service.

But what if you could also leverage positioning your competition?

To some degree or another, we humans flourish with a sort of “us vs. them” mentality. It’s the essence of competition. And when you’re a smaller operation, no one serves this role better than whoever is the big name in your space.

Think about it: MANY people do this everyday. They feel like large and powerful entities are fixing the game that we’re all trying to play…

The political party opposite of yours.

The top 1% of wealth holders.

You can siphon some of this powerful human tendency by – ethically – associating the big player in your space with some of these negative, “elite” connotations. See if you can find ways to cast competing services in the role of the villain, and you’ll build a following that thinks of you when it’s time to buy.

You’ll need to put on your detective hat. But when you come across examples of your competition acting elite, blast the hell out of them to your tribe.

For example, maybe you find out that a major provider in your vertical tends to drop the ball when it comes to handling complaints. Maybe a new update or version of what they offer is causing more headaches than intended. These are perfect opportunities to hit your marketing platforms, talking about how the big fat Company X doesn’t care about people. It’s all about the numbers to them. Whereas your company makes sure customer satisfaction is held as the highest priority.

But when you see a weakness, jump on it!

“Never interrupt your enemy when he is making a mistake.”

Check out Reddit or Forums on the company’s website if they have them. What are customers bitching about? Where is your competitor dropping the ball?

Hearing frustrations straight from the horse’s mouth will trump any customer surveys that you conduct. See what their pressing problems are, and let them know that the big guys don’t care about them.

People don’t want to feel like they’re’ just a number. And when you can – again, ethically – show them that’s what Company X treats them as….

…and that you’ll treat them better…

…the Villain Effect can be a game-changer for gaining traction.

Take Full Advantage Of Your Freedom As A “Little Guy.”

The big name in your space likely has a marketing budget and PR department that you can’t match. But you have the upper hand when it comes to one thing: being able to pivot.

As a smaller-sized or new company, you can experiment to a greater degree that the big names in your space.

You can try some different strategies for social media campaigns. Create some silly YouTube videos that make a caricature out of your big competitor.

Odds are that the big guy has become rigid in their marketing approaches. Success can lead to losing touch. Or maybe their size has led to a bunch of corporate red tape that now leaves them stuck in the mud, creatively.

Your size can allow you to pivot much quicker than the giants. This can potentially lead you to uncovering a lucrative niche that the big dogs simply miss out on. Dollar Shave Club took on a behemoth named Gillette in the men’s razor industry.

It was David vs. Goliath to say the least.

But Gillett had grown so stuck on their own positioning, that the eternal focus was on their upscale, sophisticated, multi-razor technology. They were blind to the fact that the “average joe” demographic just wanted a solid razor at a better price.

The guys behind Dollar Shave Club eventually sold for $1 billion.

Their YouTube videos were hilarious spoofs that went viral. They struck a chord with a huge audience.

Don’t stop looking for ways you can differentiate even further and then make it well known that the big dogs can’t offer what you do….better, faster, or cheaper.

This piggybacks off of what we’ve already mentioned, but it’s worth going into in more detail.

Larger companies are focused on high profit margins and high volume. They may have shareholders to bow down to. Their customer service often equates to nothing more than damage control. If someone is angry enough to chisel past a stream of generic emails the company sends, maybe someone will actually get on the phone with them.

These assertions are a bit general – and there are always exceptions – but for the most part, bigger companies simply aren’t able to form personal relationships with their customers.

Ask them how their experience has been with your service or product. See what suggestions they may have for improvement.

Email automation is great, but don’t rely on templates or send the same generic email to everyone. Create multiple lists for purchasers, repeat purchasers, non-action takers, etc and communicate with each category appropriately.

Personalization can be more powerful than a better price. People want to feel appreciated.

A Trust Pilot study found that:

Hold yourself to a level of service that the big dogs in your space can’t (or won’t) provide.Turn each individual purchase into an experience. Follow up. Amazing service isn’t the norm, and people tell their friends when they get it.

You CAN Be A Contender

If your product or service is providing a solution to people’s problems, it’s your duty to tell people. Don’t be intimidated if there are some big players in your market. Their size leaves them susceptible to oversight that you can take and run with.