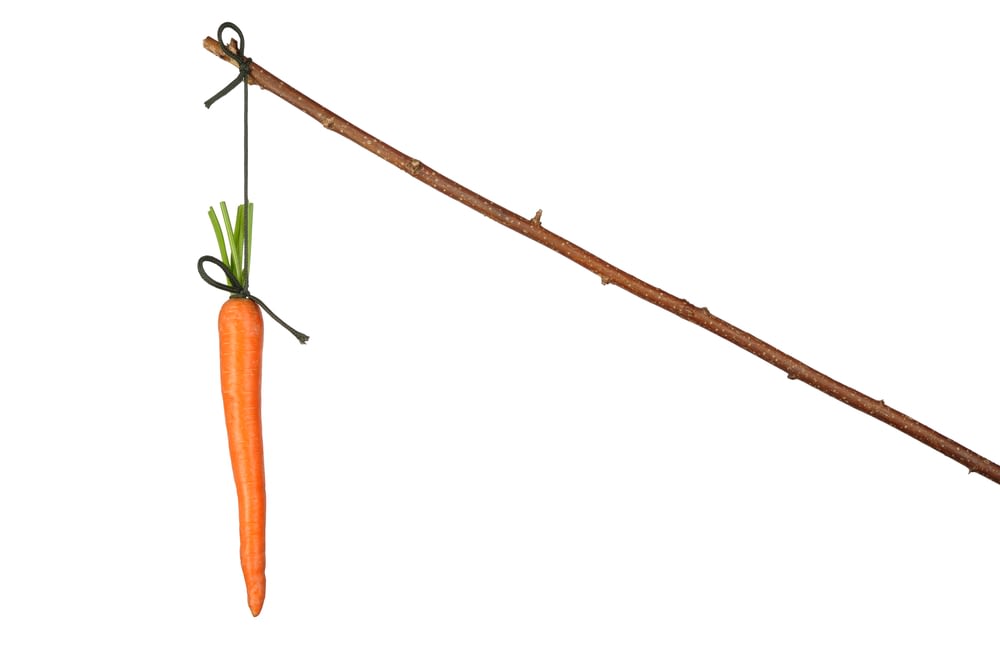 Beyond the dangled carrot: A deeper look at motivation

In case you haven’t, the idea references an old-school cart driver dangling a carrot in front of a mule with a long stick and a string attached to it. Through this cruel trick, the mule is always motivated to keep on keepin’ on, even though he’ll never get ahold of the carrot with his teeth.

Fortunately, in today’s day and age, thanks to advancements in both psychology and neuroscience, motivation doesn’t need to be some sort of brain game or mild torture method. So, if you’re in need of more motivation while at work, home or play, you’ll enjoy today’s post. As you’ll soon see, the more you understand the brain, the easier it is to not only become motivated but stay motivated.

Your Head and Motivation

Contrary to what 99 percent of inspiring Hallmark cards claim, genuine motivation begins in the brain—not the heart. Ya see, therein lie a host of neurotransmitters whose job it is to bring about chemical reactions that keep you on task and driven. While there are many neurotransmitters in the brain, for the sake of today’s conversation, the most important is that of dopamine.

As a neurotransmitter, when dopamine springs into action, it’s chemical signal is passed from one neuron to the next. While doing this, it interacts with different receptors inside the synapse between a pair of neurons. Needless to say, though a frequent process, it’s certainly a complex one.

But we’re just getting started, here—for real motivation to come about, the biggest determining factor is found in the pathway dopamine takes. Ultimately, for you to become as motivated as possible, your dopamine will need to take the mesolimbic pathway. Originating in the middle of the brain and moving outward towards the cerebral cortex, the mesolimbic pathway is the part of the brain most commonly associated with rewards.

Note: Dopamine is most commonly associated with pleasure and rewards. While news reports may throw this term out purely in relation to physical intimacy and substance abuse, in reality, dopamine is what’s released before a reward is given. At its core, it’s a motivator.

Summoning the Powers of Motivation

Have you ever sat at your desk and stared blankly at your computer, literally counting down the minutes until you can head home for the day? It’s not even that you don’t enjoy your job, it’s just hard to stay motivated when there are other, more enticing options available to you. You’re not a slacker. You’re not destined to fail at life. In reality, there’s no need to worry—we’ve all been there a time or two.

Here’s the good news—your brain can be trained to use the dopamine bursts brought about by rewarding experiences to your advantage. All you need to do is create an environment in which dopamine can be regularly released. After that, your brain will take care of everything else.

According to neurologist Judy Willis, one of the best ways to do this is through incremental goals that help rewire the brain. Says Willis in an article for Edutopia.com, “You’ll need to plan for your brain to experience frequent recognition feedback of incremental progress. You should set your ‘rewiring’ goals by their desirability and by the goals’ suitability to be broken down into clear segments. This way, you can chart your goal progress as you achieve each stepwise challenge.”

Sounds fancy, right? In short, what you’re doing is teaching your brain to attach a positive dopamine response to a specific task as a reward. As you check off a series of miniature goals en route to the fulfillment of a larger, more important one, allow yourself to feel a sense of accomplishment along the way.

With all of this in mind, however, it’s important to remember that dopamine can be used for both good and bad. It can inspire and motivate, but it can also deter action and push laziness as a type of reward in and of itself. You’ve been warned. Be disciplined, but learn to depend on your brain for help, as well.

What All of This Means for You

Do you want to know what’s crazy about all of this? While I didn’t have a timer on top of my desk, it probably took me just under an hour to write the first two paragraphs of this posts’ introduction. Sure, some of that was dedicated to Buzzfeed, CBS Sports and research, but here’s the really crazy part—In that same amount of time, I wrote the entirety of the rest of this article.

How can this be? Well, now that we understand where motivation comes from, it’s all pretty clear. With each paragraph that I completed, more dopamine was released in my brain. Incrementally, as more white space was filled with text, my desire to keep going increased. Basically, as I worked, I became more motivated. The hardest part was getting started. After that, with the help of dopamine, I was in complete and total control.

So, the next time you find yourself in need of more motivation, break down what must be done into smaller, less intimidating goals. You know how this stuff works, so trust that—as you get started with something—dopamine will build up and help you make that ever-elusive final push to get things done. Yes, this will require some mental and physical discipline on your part, but having a firm grasp on how the brain works is half the battle.