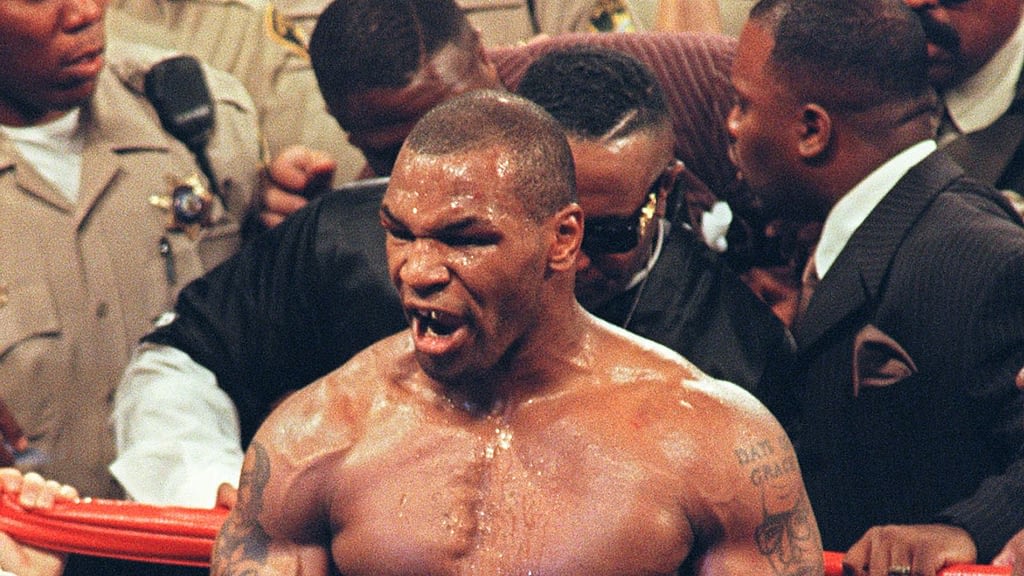 As of this writing, a 54-year old Mike Tyson just got back into the ring against Roy Jones Jr.

Sure, it was just an 8-round exhibition match. But the former World Heavyweight Champ still showed some signs of his former ferocity.

You never want to get in the ring with Mike Tyson. Not even now.

It should be obvious:

You’ll get your ass handed to you in the first round.

If you consider Mike Tyson from 1988, it gets even scarier.

Why the hell would an amateur (at best) get into the ring with a champion in their prime?

The idea is ridiculous.

Maybe so. But this is the same fatal flaw that many businesses commit with their positioning.

Let me give you an example.

Professional painter, Joey Brushes, decides to go into business for himself.

Joey did some research during the quarantine. He’s ready to “become his own boss” and start making money online. So he reads a few How-To books. He gets his kid to help him set up a Shopify store. Soon enough, Joey’s ready to become an online success selling paint thinner. He even sourced an excellent product to showcase.

But Joey Brushes just inadvertently got into the ring with the Mike Tyson of eCommerce stores, Amazon.

A quick search for paint thinner in the heavyweight champ of online retailers turns up HUNDREDS of paint thinner options (and even more accessories), many of which can be delivered to a customer the next day.

Joey Brushes gives it his best, but…

He ends up getting his ass knocked out of the ring.

This is what happens when you don’t know how to POSITION yourself in a business world made up of established champs.

Regardless of how great your product or service is. You simply won’t have the SEO firepower or mental real estate in customers’ minds to compete.

But there are some knockout lessons you can learn from Mike Tyson himself that can apply to your positioning. You may not be a heavyweight, but you can still kick plenty of ass—and even become champion—in the lower weight class divisions.

Let’s look at how you can become the champion of your OWN division.

First off let’s get clear on exactly what we mean by the term “positioning.”

One great definition comes from two legendary marketing champs, Al Ries and Jack Trout in their legendary book, Positioning: The Battle for Your Mind. These guys could sell a Virtual Reality headset to Hellen Keller. They see positioning as “an organized system for finding a window in the mind.” Now, obviously, there is no one-size-fits-all magic system for finding that damn window.

Here are some crucial ways to enter those mental windows that go overlooked, mostly due to an entrepreneur not having the balls to mix it up in the ring.

1- Re-invent yourself as need be.

Mike Tyson would be the first to tell you that he thought he would have been dead by the time he was 20. He grew up in one of the toughest sections of Brooklyn, New York, and his prospects in life looked brutal. But he found his niche in life. Even after he became the youngest heavyweight champ in history, things fell apart. But Tyson knew how to pivot. He got into acting, became a one-man show in Vegas, got a face tattoo, became less angry, put out a clothing apparel line or two, and was featured in documentaries.

The point is this:

In business, few of us ever get things right the first time around. It takes some experimenting, and, often, some defeats, to find your wheelhouse.

Don’t sweat the fuck-ups. Learn from them. Maybe you don’t get back into the ring you got knocked out in…you find a new ring.

And this ties in with the next Tyson positioning tip:

2- Become an avid student of your game.

Some people don’t realize the fact that Mike Tyson is an avid reader. He was also an obsessive student of his craft.

When he was just a teenager, he would watch old boxing footage of greats from the 20s, 30s, and 40s. While imprisoned for rape (which he maintains he never committed, by the way), he read books on psychology, sports, and philosophy.

One way for you to avoid getting in the wrong ring is to study your competition first.

Become both your own promoter and scouter.

Learn everything you can about who you’ll be getting into the ring with.

Read some marketing books, watch some YouTube videos, look at what others are doing well.

A game-changing idea can come from anywhere. But not if you ain’t looking for it.

Don’t just set up shop and expect the money to come rolling in like Joey Brushes did. Do your recon and never stop learning.

3- Don’t be afraid to make enemies.

I got some bad news for you: No matter how awesome your product or service is, there are going to be people who don’t want it. There might even be some who can’t fucking stand it. This is actually a good thing. Screw’em!

Entrepreneurship 101 teaches when you try to be everything to everyone, you wind up being nothing to anyone.

Once you’ve done your research, find the right message that will cut through the 5 tons of bullshit your prospects get hit with every day. Speak to them, and no one else.

Find (legal) ways to make fun of your competition and their loyal fans. Make them seem uncool, stupid, or UnAmerican. The more enemies Mike Tyson had in his career, the more his fans grew to love him, and the more money his fights generated.

And this goes right into our next example…

“I’m the best ever. There’s never been anybody as ruthless. I’m Sonny Liston. I’m Jack Dempsey. There’s no one like me. I’m from their cloth. There’s no one that can match me. My style is impetuous. My defense is impregnable. And I’m just ferocious. I want your heart. I want to eat his children.”

Do you think Tyson was clear about how he positioned himself?

I’m not necessarily saying you take to social media proclaiming you want to eat the children of your competitors.

What I am saying is that if you have a more abrasive style—and your product can deliver as promised—don’t be shy. You’ll have to be aware of certain platforms. For example, the Facebook Gestapo is always ready to ban an ad for whatever reason their A.I. tells them to.

But in general, do NOT sound like everyone else. Don’t pull punches. Proper grammar and punctuation take a backseat to a hard-hitting message. And if you think you’re in an industry where this sort of approach “is out of line,” there’s a good chance it just means it’ll work like gangbusters.

You just have to find your voice. People can sense authenticity. Don’t bullshit, but don’t ever hold back either.

Not everyone is cut out to be the heavyweight champion of the world. But his doesn’t mean we can’t draw inspiration for the champs, both current and former.

A tweak here… a more interesting tagline there… proudly boasting of your points of differentiation.

The right positioning might take a little time to develop. Consider it as an entrepreneurial training camp.

Because once it all clicks, you’ll be ready to get in the ring and knock some motherfuckers out.

Set your next research project up for Guaranteed success

The Research Project Plan Template is the easiest and fastest way to create a focused approach to any research project.

FREE guide to ID'ing Your Competition (like a detective).