“Tom, don’t let anybody kid you. It’s all personal, every bit of business. Every piece of shit every man has to eat every day is personal. They call it business. OK. But it’s personal as hell. You know where I learned that from? The Don.“

There’s a reason that the movie The Godfather is regarded as one of the best cinematic achievements in history. It’s themes of loyalty, respect, and family that strike a deeply visceral chord.

And when it comes to business, There’s a ton we can learn here. After all, In a perfect world, you’d be making your customers an offer that they can’t refuse.

You can have the most dedicated marketing firm, copywriters, PR firm, whatever. But if your offer isn’t dialed in the way it needs to be, it’s going to fall on deaf ears.

It all comes down to your offer.

Position it correctly, and your business will thrive like the Corleone family itself. Miss the mark, and you end up swimming with the fishes.

Let’s take a look at a few ways that the Godfather taught us to make an offer that they can’t refuse.

DISCLAIMER: we don’t condone blowing anybody’s head off or using violence of any sort.

It’s all about respect.

One thing that you obviously see a lot of in the movie is that of respect. And when it comes to your business, it should be the foundation of everything that you do.

You can’t look at your customers or prospects as numbers. You have to know them. You have to understand them.

Everything you do within your business should foster mutual respect that will be in place for the long-term.

When you respect someone, you know what makes them tick. You have an understanding of what keeps him or her up at night. You know what their values are in life. This information is crucial in crafting an offer that’s going to have them reaching for their wallets.

Making a great offer is a hell of a lot more than just saying. “Here’s my product! Now come get it!” It still shocks me how many businesses take this approach. They figure as long as our doors are open or their eCommerce website is up, the people just come flooding in.

The competition is too fierce. You have to connect on some sort of level of respect.

If you’re offering the same thing as everyone else is – with the only difference being your company’s name – don’t expect anybody to give you much respect with their money.

In the movie, Vito Corleone treats everybody with respect. Even the drug dealer, Solozzo, who comes to him looking to do business. While the Don doesn’t trust Solozzo, he shows him respect and politely declines.

The Godfather of modern marketing and advertising David Ogilvy had a famous quote:

Do me this favor… 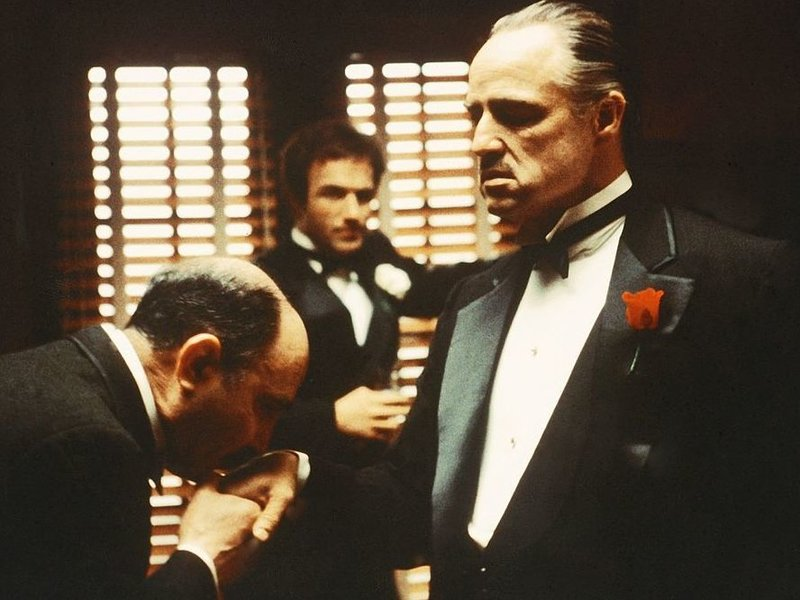 There’s a scene at the beginning of The Godfather where a local mortician comes to see Don Vito Corleone.

He’s Seeking Justice. His daughter has just been assaulted by two punks. But their family had some connections, and they were released from jail.

So the mortician is looking for assistance from the only place that he can. The only problem is, before this, he never shown any respect to the Don. He never wanted to acknowledge Vito Corleone. And now he is asking for favors.

He eventually acknowledges Vito as The Godfather and kisses his hand. Then Vito grants him the he’s seeking. He also lets him know that one day they’ll come a time when he needs to repay the favor.

These might not seem like “favors.” But streamlining the process from taking someone from prospect to loyal customer is a very delicate one. If any part of your offer creates confusion or loss of interest you have a chance of losing them. That’s not doing them any favors.

Your product or service is unique and important. The favor you’re doing for your audience is making it as accessible as possible. That’s a huge favor when you think about it.

People that have felt guilty about being salesy or being in sales, in general, fail to realize that they have an obligation. And that’s to help people find a solution to their problems through their product or service.

This is the main reason why companies offer lead magnets. You can leverage The Law of Reciprocity when you give them a little something upfront. Do them this favor, and they’ll remember you.

Whether it’s a free report, a nice discount on their first order, a case study, or whatever.

Be very direct with them. And if you need to slap someone around to get their attention like Sonny Corleone, do it.

But you have to sometimes be blunt to get their attention. Never make the offer just about the features and benefits of your product. Tie into the offer how awesome their life will be once they decide to go with what you’re offering.

And speaking of getting attention…

A direct offer that blows them away

Johnny Fontaine, a popular entertainer and also the godson of Vito Corleone, has a problem.

A big-shot Hollywood movie producer refuses to cast Johnny in a role that could boost his career. So he comes to see his Godfather. Vito Corleone ensures him that he’ll get the movie role. And when the singer asks how that’s going to happen, Don Corleone’s reply made movie history…

First, the Don sent his trusted advisor to try and negotiate with the producer. The producer told him to go to hell.

So it was time to get more audacious.

The movie producer wakes up to see the head of his beloved prize horse lying next to him in his bed.

So again, I’m not suggesting you leave dead animal parts in the beds of your prospects. I tried that once before anyhow, it didn’t work out well.

But you’re offer does have to be memorable. Few people have the luxury of marketing something as revolutionary as the iPhone. In a situation like that, you can simply say, Check this out. Now come get it.” The rest of us have to resort to other attention-grabbing tactics.

Huge discounts, two-for-one deals, or something else almost too good to be true is where people are really going to take notice. Obviously, you don’t want to give the house away. But whatever promotion you can do where you’re offering a price they can’t refuse will only improve the response.

It’s common to use a mini offer at a can’t-refuse price point to get them in the door. Then present the main course as an upsell on the backend. They’ve already done business with you and will now be more inclined to do so again.

If a prospect still refuses to do business with you, that’s when you can hit them with the horse’s head. You email them an offer so heavily discounted that they would feel silly not to buy.

Let Them Join The Family

It might take a little trial and error. However, when you can make an offer that seems like genuine assistance, as opposed to just trying to make a sale, you’re developing a relationship that can turn into a long-term and lucrative one.

Think about some of the offers that have grabbed your attention in the past. Think about when you saw a promotion where you just  knew you had to pull the trigger. Reverse engineer it and apply it to what you’re doing.

But an irresistible offer sure can.